During His trial before the Sanhedrin, some people charged Him of having threatened to “destroy this temple that is made with hands” and in “three days” He would “build another, not made with hands” (Mark 14:58). Even more important is Jesus’ response to the Jews in Jerusalem who question Him for tipping over the tables of the money changers in the Temple:

If we fast-forward to the ending of the Gospel of John, something happens during Jesus’ crucifixion that sheds one last ray of light on the question of Jesus’ identity. Instantly after Jesus passes away, one of the Roman soldiers pierces His heart with a spear in order to make sure He is dead. When He does this, something mysterious occurs:

Since it was the day of Preparation, in order to avoid the bodies from remaining on the cross on the sabbath (for that sabbath was a high day), the Jews asked Pilate that their legs might be broken, and that they might be taken away. So the soldiers came and broke the legs of the first, and of the other who had been crucified with him; however when they arrived at Jesus and saw that He was already dead, they did not break His legs. But one of the soldiers pierced His side with a spear, and immediately there came out blood and water. He who saw it has actually attested– his testimony holds true, and he knows that he tells the truth– that you likewise may believe. (John 19:31 -35). 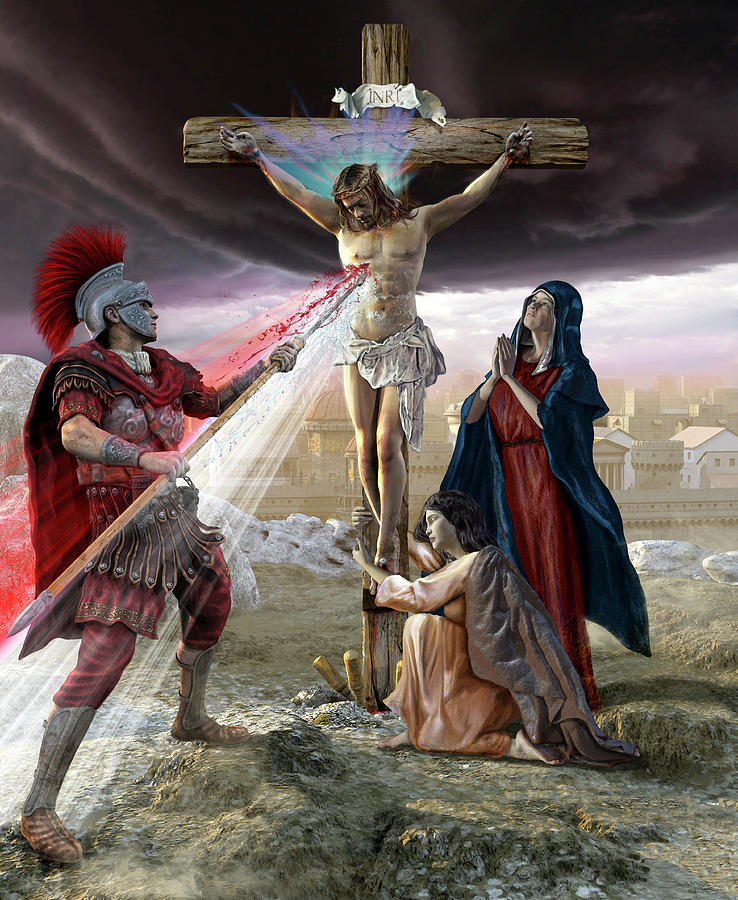 Obviously something significant just happened. Nowhere else does John interrupt his Gospel like this to firmly insist that what he is saying is based on eyewitness testimony. So why is he so emphatic in firmly insisting that the “blood and water” flowed from the side of Jesus crucified and that “he who saw it” is telling the truth? What would this flow of blood and water from Jesus’s side have meant in a first-century Jewish context?

In order to answer the question, bear in mind that Jesus was put to death not just during any time, but during the Jewish “feast of the Passover” (John 13:1). In our day, it has come to be customary for Jews (and lots of Christians) to commemorate the Passover meal (referred to as a Seder) anywhere in the world. However in the 1st century AD, that’s not how the occasion was observed. At the time of Jesus, the Passover was not simply a meal; it was a sacrifice. And sacrifices could be offered only in the city of Jerusalem. Because of this requirement, once a year large numbers of Jews would travel to the city of Jerusalem in order to sacrifice the Passover lamb in the Temple. In fact, Josephus, who was himself a priest in the first century AD, explains the sacrifice of the Passover lambs as follows:

So these High Priests, upon the coming of their feast which is called the Passover, when they kill their sacrifices, from the 9th hour to the 11th … found the number of sacrifices was 256,500; which, upon the allowance of no more than ten that feast together, totals up to 2,700,200 individuals that were pure and holy. (Josephus, War, 6.423– 37)

Most modern-day individuals have actually never before seen a single lamb sacrificed, much less tens of thousands! This background is important for understanding what occurs to Jesus on the cross because of the way in which the blood of the Passover lambs was gotten rid of. Think about it: if thousands of lambs were sacrificed in the Temple in one day, then where did all the blood go?

According to ancient Jewish tradition, before the Temple was destroyed in AD 70, the blood of the sacrifices used to be poured into a drain that flowed below the altar of sacrifice to merge with a spring of water that flowed out the side of the mountain on which the Temple was built:

At the south-western corner [of the Altar] there were two holes like 2 narrow nostrils by which the blood that was poured over the western base and the southern base used to run down and mingle in the water-channel and flow out into the brook Kidron. (Mishnah Middoth 3:2)

So at the time when Jesus lived, if you were approaching the Temple during the feast of Passover from the vantage point of the Kidron Valley, what might you have seen? A stream of blood and water, flowing out of the side of the Temple Mount.

When you’ve got this first-century Jewish context in mind, suddenly John’s focus on the blood and water flowing out of the side of Jesus makes sense. This somewhat small detail about His death in fact exposes something deeply important about who Jesus really is. He is not just the messianic Son of God; He is the true Temple. In other words, Jesus is the dwelling place of God on earth. For that’s what the Temple was to a first-century Jew. As Jesus Himself says elsewhere: “He who swears by the Temple, swears by it and by him who dwells in it” (Matthew 23:21).

Given this first-century Jewish context, the piercing of Jesus’ side after His death reveals that He was the presence of God on earth. His body was the true Temple. That’s why Jesus responds elsewhere to the Pharisees’ accusations of Sabbath breaking with the following shocking declaration:

Have you not read in the law how on the sabbath the priests in the temple profane the sabbath, and are guiltless? I tell you, something greater than the temple is here. (Matthew 12:5 -6)

As first-century Jews would have understood, according to the Old Testament: “Hatred stirs up strife, however love covers all offenses” (Proverbs 10:12). Or, as the apostle Peter puts it: “Love covers a multitude of sins” (1 Peter 4:8). And if this holds true, then the crucifixion of Jesus, by which he willingly offered “His life as a ransom for many” (Mark 10:45)– changes every single thing. For if love covers a multitude of sins, then divine love, infinite love, covers an infinite plethora of sins. Even your sins. Even my sins. This is profoundly what the prophetic evidence of the pierced side of Jesus Christ points to!

Indeed, that is what converted the first Jewish Christians (and the first pagans, for that matter). Which is why the apostle Paul, after his conversion, could write these words:

“We preach Christ crucified, a stumbling block to Jews and folly to Gentiles, but to those who are called, both Jews and Greeks, Christ the power of God and the wisdom of God. For the foolishness of God is wiser than men, and the weakness of God is stronger than men” (1 Corinthians 1:23 -25)