God is all-knowing. However according to the Bible, Jesus seemingly did not even know the day or the hour of His 2nd coming. (Mark: 13:32) In this article, we will show exegetical evidence showing that this is definitely not the case and that there’s better evidence proving just that.

According to the Bible, Jesus was both God and Man at the same time. The one divine Person of Christ took on a true human nature without stopping to be God. In Christ, both the nature of God and the nature of man were flawlessly unified in one Person. For this reason, Jesus had both a divine and human awareness. In His human consciousness, Jesus’ knowledge was finite and limited and therefore explains Him not knowing the day or the hour of His 2nd Coming? This evident tension involving Christ’s Divine and Human natures was an enigma and is called the Hyperstatic Union of Christ.

This view produces an added Pneumatological (the study of the Holy Spirit) issue because it should not just be acknowledged that the Son was oblivious of some things, because of the declaration “only the Father knows”, then the Holy Spirit should likewise be oblivious! While Christ’s apparent lack of knowledge could be clumsily rationalized by appealing to His 2 ‘minds’ (human or divine), the very same technique can not be applied to the Holy Spirit! 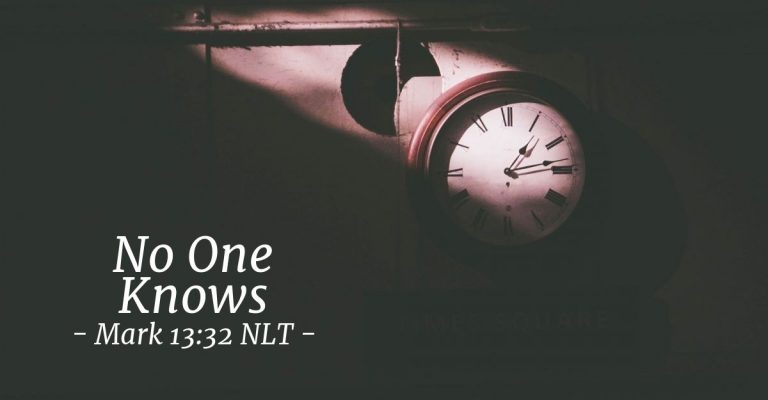 A really natural and basic answer to this problem of Jesus apparently not knowing the day or the hour, remains in the word “know”. The word “know” in this verse is not the typical “ginosko” (such as Mark 13:29; Luke 19:44), rather it is the word, “eido”.

“Dr. Macknight, and others, solve this difficulty in the following manner. They suppose the verb oiden to have the force of the Hebrew conjugation hiphel, in which verbs are taken in a causative, declarative, or permissive sense; and that it means here, make known, or promulge, as it is to be understood in 1 Cor. ii. 2. This intimates that this secret was not to be made known, either by men or angels, no, not even by the Son of man himself; but it should be made known by the Father only, in the execution of the purposes of his justice.”

The word ginosko tends to be used of know by general knowledge and the word eido is used of know for the reason that you’ve been authorized to be told. That is, in Matthew 24:36 and Luke 13:33, Christ is stating that He is not authorised to be more specific. It should be acknowledged that what Christ foretold in Matthew 24 and captured likewise in Mark 13 was fulfilled in accurate detail at exactly the time Christ said it would be.

It appears that Christ is stating that future eschatological occurrences are determined by the Father and that Christ is authorized to tell this much and no more. By comprehending the text in light of this exegetical evidence, there are no hermeneutical issues created, no Christological undermining, no unexpected Pneumatological issues produced, and everything we understand about God, His Son, His Mission, and divine omniscience is maintained with integrity. Therefore, we can conclude that Jesus DID KNOW the day and the hour of His 2nd Coming!